Download the latest packaged release of osMUD or direct source code from the osMUD GitHub repo.

Instructions for how to install and deploy osMUD are provided in the source repository:

osMUD currently supports networks that use DHCP. Future work may be done to allow for protocols supporting Radius or LLDP compatibility.

We are working on making the dnsmasq DHCP server compatible with reading a MUD Url included in DHCP headers when the device enters a network.

More DHCP servers & firewalls will be supported soon. Ask how you can help or let us know which dhcp server/firewall would be great to support next! Provide feedback to the osMUD developers

How osMUD communicates with DHCP 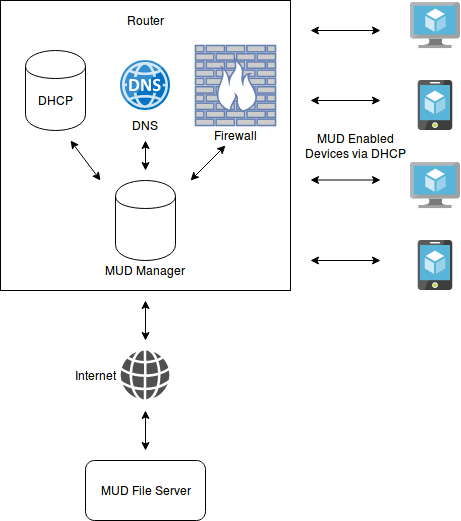 What osMUD does NOT do yet:

How to set up a MUDfile server

How to build a MUDfile

How to create code signing cert